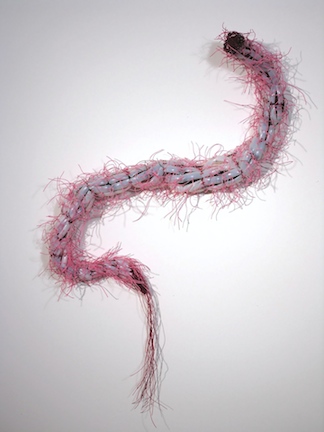 Donna Hapac is a constructor, whose work has a formal core and a funky edge. Instead of making a series of preparatory drawings, she often goes directly into form. Working with the material, she sees possibilities and lets things happen.

Oddly enough, her latest body of work began with a drawing of a sea cucumber. Artist friends saw an element in her image that suggested artificial fingernails. This unexpected idea fit Hapac’s construction aesthetic, so she purchased 2,500 artificial nails over the Internet. Drilling holes in each end, she tied the nails together with waxed threads to create a snakelike tube—and placed a length of red velvet rope inside.

Creature I (2006), her 45-inch-long piece, has a body made of two concentric fingernail tubes, a fearsome lamprey- like mouth of red velvet, and a dangling tail of red threads. Creature II (2006) is the latest and most flamboyant piece in Hapac’s fingernail series. Serpentine and very, very pink, this 78-inchlong, 31/2-inch-wide wall piece is made from a neon wire that emits a lime green light. Next to the wire is a chain of narrow black fingernails, painted opalescent green and tied end to end with lime green thread. Surrounding the wire and the black nails are larger fingernails, painted pink, oriented horizontally like the scales on a reptile’s belly, and tied together with pink thread. A green element, suggesting a split tongue and made from smaller fingernails, emerges from the top of this construction, while the electric wire hangs from the bottom.

Creature II is composed of repeating shapes and patterns. Construction involved hours of drilling and thread tying, activities that Hapac calls “a female thing” and connects to a family tradition of sewing and crochet. She acknowledges that there’s “something creepy” about Creature II. “The fingernails may be fake,” she states, “but they have a touch of ghoulishness to them.”

Previously, Hapac made hollow flaring sculptural constructions whose overall form suggests horns or flowers from waxed thread and reed. She employed traditional basketry fibers, but invented many of her construction techniques, letting the material be her guide. These works consist of a few curving reeds that are contained by crosspieces, which spiral around them to create abstract patterns in space. They derive their tension from arrested movement, the artist says.

The reed sculptures are formal creations with no narrative content, Hapac states. Intended for viewing from many angles, they can be suspended, wall-hung, or displayed on a pedestal. When lit, they cast multiple shadows, whose softness and dimensional variety contrast with the crisp lines in the sculpture.

Prairie Smoke (2006) is a 36-inch-long suspended construction, made from a carved dome-like cedar base, reed, copper wire, waxed linen, and wood stain. It has a horn-like shape, but long, dangling threads on its perimeter distance it from simple associations. The sculpture is made from three concentric reed cylinders with flaring ends. The smallest is stained black and a second, naturally colored cylinder encircles it. The outer form is red. Hapac’s layered construction creates rich linear and planar complexity, which can be witnessed from multiple perspectives.

After years as a painter, Hapac first took note of fine art basketry in 1986, when she was Executive Director of Chicago’s Textile Arts Center. She installed basketry shows, lived with the work every day, and soon began to experiment on her own. Later, she saw flat maps made from cane in a Pacific Islander exhibit at the Field Museum. She made a mask from cane, and followed it with flat, reed wall-hung constructions before leaping into three dimensions.